Sima Sahar Zerehi – When it comes to a debate, wording is everything.  How you frame the resolution makes all the difference.  The tenth semi-annual Munk Debate, which faced off Pulitzer Prize winner and FOX News contributor Charles Krauthammer and ex-IDF Major General Amos Yadlin against CNN’s Fareed Zakaria and member of the U.S. State Department’s Foreign Policy Advisory Board Vali Nasr, was clearly framed to disadvantage the cons.

As per Munk Debate tradition, the attending audience was presented with a ballot before the debate to gauge their initial leanings, and once again polled after the debate to see which side had succeeded in swaying the audience vote. 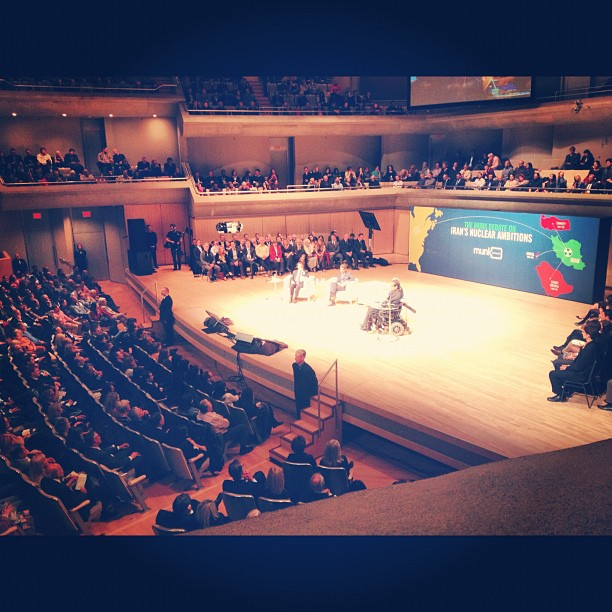 Like many Iranian ex-pats I walked into the debate ready to mark my ballot with a resounding no vote for any position that could result in military aggression against Iran.  My mind was full of the usual lefty rhetoric such as “you can’t bomb a country to liberation.”  Thoughts of decades of failed US foreign policy in the Middle East and North Africa preoccupied my mind. I didn’t want to see my country of birth reduced to the rubble of Afghanistan or the chaos of Iraq.

When it came to war against Iran, my answer was “hell-no!”

With this state of mind I opened my program ready to mark my ballot, only to find the following resolution: Be it resolved the world cannot tolerate an Iran with nuclear weapons capability.

Okay now colour me red, literally not politically this time, because I had to pause a few minutes before I gained the composure to figure out if I was a pro or con.  I mean, I didn’t want to see bombs fall on the heads of my extended family members and friends in Iran but I surely wasn’t in favour of handing a genocidal government intent on oppressing their own population, a set of nuclear weapons.

This is the problem with debates, and politics in general, there are slippages.  With a few cleverly worded constructs you can disguise your real intentions and sugarcoat the truth; this is the world of ‘collateral damage’ and ‘surgical attacks’.

Luckily, Zakaria and Nasr representing what passes for a left-leaning position in the world of Munk Debates had no difficulty weighing through the noise generated by Krauthammer and Yadlin’s alarmist arguments, to get to the heart of the question.

If we refuse to accept deterrence and containment as a strategy against Iran’s nuclear ambitions the only remaining option is to contemplate military intervention.

Zakaria expertly used the examples of the Cold War, China, North Korea and India to point out that history suggests that deterrence and containment have worked in the past against yesterday’s dictators and despots and will likely work against the Islamic Regime of Iran.

In opposition to Yadlin and Krauthammer personification of the Islamic Regime of Iran as an illogical entity blindly driven by fundamentalist religious fervor, Zakaria offered a portrayal of the IRI as “cool, calculating, shrewd.”  He posited that the Islamic regime which is intent on maintaining their hold on power, will be deterred by Israel’s arsenal of nuclear weapons and submarines backed by US military might.

Zakaria drove his point home by extrapolating what would happen if the US attacked Iran preemptively.  He suggested that a military strike by a foreign entity would rally the internal Iranian population around the currently unpopular regime as well as garnering support from other nations in the region.  He also pointed out that while such an attack may succeed in destroying some of the infrastructure in Iran, it would only set back Iran’s nuclear program about two years, according to projections generated by Israeli intelligence.

Zakaria concluded his opening argument by noting: “Every year for the past ten years I have been told that Iran is one year away from getting a nuclear bomb, either Israeli intelligence is very bad, or we have been very good at deterring and containing Iran.”

Not surprisingly, the question of Israel dominated much of the debate.

In opposition to Krauthammer and Yadlin’s assertion that Iran’s position against Israel is more religiously motivated, Nasr argued that Iran’s anti-Israel stance is a result of “cold calculation about what will promote their interests in the region.”  Both Zakaria and Nasr argued that the IRI is using the Palestinian cause as a means of popularizing itself in the Arab world and by doing so deterring Arab governments from being able to take openly hostile positions against Iran.

As Zakaria pointed out, “This is a Shiite Persian regime that is in a region dominated by Sunni Arabs.”

Although Zakaria scored most of the points for the cons, Nasr also held his own.

Offering some poignant analysis about the true nature of the Islamic clerics as power hungry politicians willing to risk the lives of others rather than religious zealots willing to martyr themselves and their personal interests in the name of their religious beliefs.

Nasr stated, “The Iranian leaders are old men, they didn’t get to that age by believing in suicide bombing, not one of them carried it against the Shah’s regime, not one of them has sent out his own sons to carry out a suicide attack.”

The debate concluded with a knock out punch delivered by Zakaria against his one time boss Krauthammer.  I would quote him but it’s so much better if you see it for yourself.

The debate is available online on the Munk Debates Facebook page at http://www.facebook.com/munkdebates or you can watch it through their website at http://www.munkdebates.com/debates/iran-s-nuclear-ambitions by signing up for a membership.