Sima Sahar Zerehi – I walk briskly (under the rain[i]), head down, trying to prevent the icy cold needles from hitting my bare skin (umbrellas should be closed); only a few more blocks to home. Maybe it’s what feels like a long winter (How my inside is alone), the frigid February slush that makes you shut your door and windows and cocoon under the covers (we must go under the rain).  Or maybe it’s that ambiguous sense of solitude (someone is lonely) or homesickness I can’t quite pin down since this is home as much as anywhere can be (I will build a boat and get away from this foreign land).  But somewhere between the pitter-patter of the raindrops and wet slosh of my heavy rain boots under the pavement, I start hearing the music like a distant echo and then the lyrics circle through my head, first as murmurs, and then as sharp and clear as truths (thoughts, memories, should be taken under the rain. A friend should be seen under the rain.  Love should be sought under the rain.)

The words are from Sohrab Sepehri one of Iran’s most notable modern poets, and the music that illustrates them is from the Tehranto band The Circle. 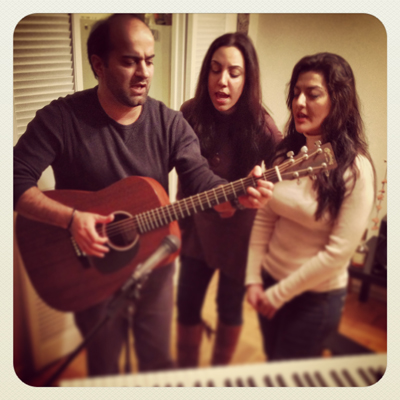 The Circle is a fusion band that marries the iconic Iranian poetry of literary giants such as Rumi, Shamlou and Sepehri with a unique blend of classical and contemporary music. Seasoned musician Shahab Baradaran who composes the songs, arranges the music, plays the electric and classic guitar, and provides some vocals anchors the band.  The enchanting voices of Sara Nejad, and Mona Ketabian complete the now three-member group.

Shahab is a musician’s musician, he communicates music with music, when asked to describe the pieces produced by the Circle, he starts humming one tune after another to illustrate the divergent musical roots that he uses in creating their work, and illustrating how the songs come together by marrying various melodies and harmonies.

Seeing the perplexed look on my face, Sara offers, “We have this issue of categorizing our work.”

Mona adds, “What people say about our work often is that we are unlike anyone else.”

Shahab transitioning to words states, “Our base in piano, guitar, drums and percussion with elements of more classic Iranian instruments like kamancheh, setar, koozeh, as well as some traditional western instruments like violin”

“Our music is not traditional, we are re-inventing classic poetry with new music,” notes Sara.

“We have such a strong history of poetry in Iran,” continues Mona.

“This poetry is timeless and we have the responsibility of passing it on,” chimes in Sara.

“It’s a huge responsibility, but the lyrics we use are the main reason I connect so strongly to the work,” admits Mona.

Mona and Sara have a tendency to speak in unison, finishing each others thoughts and sentences without missing a beat, listening to them speak is reminiscent of the perfect harmony of their joined vocals.

To a large extent, The Circle credits Reza Moghaddas from Bamahang Studios for encouraging them to form the band in 2011.  “Reza gave us the push we needed and much assistance to get started,” notes Shahab.

The band’s first performance was at the Royal Ontario Museum during the Persian Heritage Day in 2012.  The debut before a crowd of over 400 people was a success, “that’s where we found most of our fans or they found us,” admits Sara.

To date, the group has released two albums, Say Nothing (2011), Shahab Baradaran’s solo classical album based on Rumi’s poetry, released for Rumi’s 804th birthday.  The album was composed, arranged, and produced by Shahab Baradaran with backup vocals by Sara Nejad.

Beyond the Seas (2012), is the group’s first album as The Circle.  This album has a jazz/pop/fusion sound with all lyrics taken from Sohrab Sepehri’s poetry.  Beyond the Seas includes contributions by Nima Orang, Reza Moghaddas, Steve Faruugia, and Kousha Nakhaei.

The Circle’s work has always been tied to culture and poetry; in fact their first concert which took place in November 2012, was organized as A Night in Memory of Sohrab Sepehri.  The concert included the presence of guest artists Professor Gholamhossein Nami, Reza Moghaddas, Steve Fruggia, Kousha Nakhaei and Soleyman Vaseghi (known as Soli to Iranian music aficionados).

Last month the group collaborated with Neemeha and other Toronto musicians on Strange Fruit, a sold out concert at the Richmond Hill Centre for the Performing Arts.

“We really enjoyed working with Neemeha, actually we’re submitting a joint proposal to Tirgan to once again collaborate on another concert for the July 2013 Festival at Harbourfront.  We’re really excited to show everyone what the Toronto Iranian music scene is like,” explains Sara.

The Circle will be performing at the upcoming Tribute to Dr. Atta Safavi on March 3 at the Paria Trillium Foundation.  Reza Moghaddas, Araz Nayeb Pashaee, and Saman Shahi will join them on stage.

If you haven’t yet had the chance to hear this band, you’re missing out. The music The Circle creates is like the poetry they base their songs on.  It’s the stuff that fills the empty corners of your mind echoing through the forgotten chambers of your memory and tugging at your heartstrings.  It sounds like a fictitious homeland, like the loneliness of unrequited love, like the profoundness of thoughts as expansive and clear as a cloudless sky.

On a chilly February night when spring seems far away, and only the candlelight flame of poetry and music can warm your soul, The Circle provides music that harks of conversations with friends illuminated by a rich bottle of red wine and hopes of a green spring to come.

To learn more about The Circle visit their Facebook Page http://www.facebook.com/TheCircleMusicBand?ref=ts&fref=ts

Or their website www.circlemusicband.com where you can also order a copy of their CD

IAAB Makes Way for the Next Generation